Think the NYC Metro is all about powerful men? Think again! Though the area has a reputation for being something of a businessman’s playing field, there are actually quite a few women in the area who’ve more than disproved that theory. Here are some of the most powerful women in Bayonne and the NYC metro area.

The City of Bayonne actually has quite a few women in positions of power. The Bayonne City Council President is Sharon Ashe-Nadrowski. Janet Convery is the City’s treasurer. Joanne Sisk is a Bayonne tax collector. And Stephanie Burt-Schiraldi is a lieutenant with the Bayonne Police Department.

The New Jersey Association of Women Business Owners is an organization dedicated solely to the wellbeing and advancement of women entrepreneurs in the area. Its members are all business owners, and even its leadership team is comprised solely of businesswomen.

President Holly Kaplansky is the owner of Minuteman Press of Newark. The VP of Corportate Relations is Lindsay Haug, owner of Commence Coaching. And the MetroEast Region Leadership Chair, Taryn Abrahams, is the owner of Empower Behavioral Services.

You might be surprised at some of the big name businesses that were started by, or are run by, women. Like The Huffington Post, which was co founded by Arianna Huffington, or FanDuel, co founded by Lesley Eccles. The immensely popular cycling workout class, SoulCycle, was co founded by two women, Elizabeth Cutler and Julie Rice, who remain its chief creative officers. And what about IBM? Did you know that its CEO is Ginni Rometty? 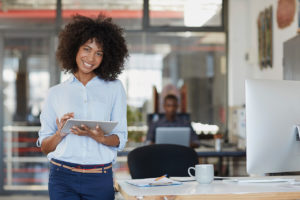 Big-Wigs of the Fashion World

New York is known for its financial and tech companies, but it’s also known for its fashion. And there are definitely some women in high seats in the fashion industry in America—like Kari Talley, Fashion Director of BPCM. There’s also Jana Fleishman, Head of Media & Artists Relations for Roc Nation, and Mona Sharf, Director of Communications & Celebrity for Theory, Theyskens’ Theory and Helmut Lang. And ever heard of Coach? Its VP of Public Relations is Kerry Diamond.

Are You Ready to Join NYC’s Most Important Women?

If you’re thinking of relocating to or buying a home in Bayonne or the NYC metro area, then it’s time to contact Century 21 Viewpoint Realty and head broker Carla VonBryden. We’re here to help you explore the area, discover the amazing community, and find the perfect home for you.